I can’t seem to like or love TV Shows with poor casting and poor scenery / costumes / atmosphere / history.. you name the bunch. Why not? Because it does not seem genuine. I can’t focus on the story if the rest doesn’t make sense.

By now you guys know which TV shows I love. And the Baytree universe has a new pearl indeed; The Musketeers from BBC. Firstly, I had the same doubts about this show as I have with the described. I always found the story of d’Artagnan and the Three Musketeers a bit too theatrical after seeing the rendition of the 2011 movie (logically maybe, since the story was written in the Romantics, 1840). It had no core, no bonding to the story nor the characters. I believe beauty of a good TV show is as much in the simplicity of acting and shots and costumes as much as it is in the details. That’s what I would advise any project: keep it simple, but ever so detailed. It gives you the honesty of the process, and an honest view of every emotion, foundation, whatever..! But we are rambling here again, let’s move on:

But after the first two episodes or so, I couldn’t stop watching. Even though I think the story is still not the best it maybe could be, they have depicted it so well for that story, that I don’t think anyone could do the story more justice in a more entertaining way.
I love how good the casting is and how every actor IS his character. You can immediately tell if an actor or actress has been chosen for his or her looks rather than his/her acting or for the name rather than the quality you want to persue. The musketeers are all spot on, I love them all equally. And they are all SO different from one another. Which is key if you want to film a group of main characters. I did have some doubts about the female parts at first because I thought they were more chosen for their looks, but I quickly saw that they actually nailed their characters and with Peter Capaldi in the game as well I just couldn’t stop. (And to draw the circle; Peter Capaldi is Scottish so there you go 😉 )

Anndddd I’m back writing this article within watching season 2 and.. WHERE IS PETER CAPALDI? Now I’m sounding like a fangirl, which is not really my intention – I don’t even really know the actor outside this series, but oh my god is Rochefort annoying. I think his character might be way too simple for this show. But season two does make me thrilled for the just started season 3. The new costumes (& these) are miraculous and daring! Aramis goes short jacket, d’Artagnan goes daring black, Porthos goes more colourful, Athos even more French (the beard). And they all go longer hair for as far as I can see. Just as with Outlander, I am very intrigued to find if the new costumes actually work. For now, I’m still in season 2 so I’m hurrying up!

The overall vibe of The Musketeers is spot on. I like the little cases within every episode of season 1 in perticular and I love the main characters. I love how light the story is, and how well they have transformed the rather romantic novel into a truly epic quest. Well done BBC. Now let me copy your costumes.

And also.. The Musketeers has now got me learning Spanish. You know, watching TV shows can have a good impact ;).

Me rambling on about amazing historical underlays of the characters, costume choices and the book and things I need to know for my own costume.

The character of d’Artagnan is historically based on Charles de Batz-Castelmore from Gascony (oh those names), who later named himself Sieur of Artagnan. He did serve as a great Musketeer but not under the king and queen in the TV show and the book, but under Louis XIV of France. Yes the Sun King Louis, and yes the son of Aramis and queen Anne in the series (haha I love how they twisted that).

Aramis (can we just say for a moment: Santiago Cabrera..), Porthos and Athos are actually based on genuine people as well. These musketeers did serve under Louis XIII as in the series. Captain Traville is also based on a genuine musketeer. Also, there was a dispute between the Cardinals Red Army and the Kings Musketeers during Louis XIII reign. The Red Army was in real life called the Musketeers, ironically. The King’s Musketeers were called the Garde du Corpse. This brought friction between two musketeer corpses. Later, at the reign of Louis XIV they were merged together which, according to Wikipedia, ‘to the disgust of both the King’s Musketeers and the Cardinal’s Musketeers’. So there we have the actual friction between the corpses. From 1776 on, the musketeers were brought back in and out of the regime for budgetary reasons.

All this history gets a bit tiring.. Here, this will make you laugh without a doubt.

Porthos, based on Isaac de Portau in real life was a musketeer with d’Artagnan (Charles Castelmore) from 1643 on. Henri d’Aramitz, Aramis, was related to the real life Monsieur de Treville as was Armand de Sillegue, Armand d’Athos et d’Autevielle – so; Athos. Isaac de Porteau was a Gascon Black Musketeer, Charles de Batz-Castelmore d’Artagnan (can French ever be more beautiful) served Louis XIV as captain of the Musketeers of the Guard, Henri d’Aramitz was a Gascon abbé, and Black Musketeer of the Maison du Roi  and Armand d’Athos was also a Gascon Black Musketeer of the Maison du Roi. Rich characters to build characters on.

Cardinal Richeleu who died 1642 also did influence the King (though, while he was ill) to start a war. But not with Spain in the show or England in the book, but with Rome. Which is kind of a twist itself. Queen Anne is called Anne of Austria in real life (and in the book), which seems an opposing fact since Anne is from Spain both in the book and in the show, but this is because the rulers of Spain belonged to the House of Austria.

It also appears that real life Treville was engaged in a complot to assassinate Cardinal Richeleu, which made king Louis XIII abandon his ‘friend’ as SparkNotes states. Interesting as this is what, not under the same circumstances though, happened in the show in season 2. 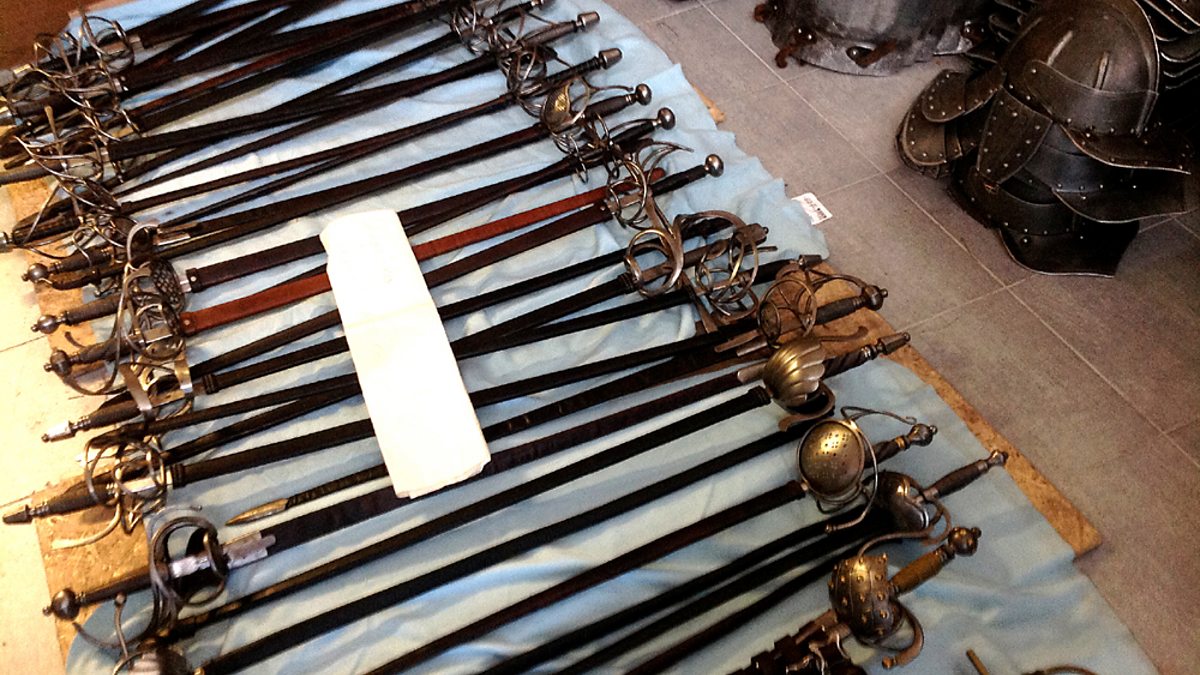 Behind the scenes of The Musketeers 😮 – can I just walk there for a second. Yes please.

There is one thing I was really curious about. Did common people such as our main musketeers appear to be, and Porthos certainly is because of where he grew up, become the musketeers to serve and actually see the king? In the 17th century? It didn’t really seem plausible to me. And after some digging, I found out what caused my presumption. There were a lot of different groups of musketeers. You had the Musketeer soldiers in the army. They were soldiers on foot and sometimes on horse. They wore – of course – their muskets (in Aramis’s case: an arquebus) and later more advanced artillery. These guys would have been the commoners. But were they the same ones as our musketeers?

This is were the difference lies: there are more than just the soldier musketeers. The musketeers we are looking for are the Kings Musketeers. Here it comes, this guard was at first founding called the 1st Scottish(!) Company formed in 1440 by Charles VII – haha! Now those chaps are something entirely different. Those musketeers did see the (French) king daily, because they were the king’s private bodyguards so to say. It’s very interesting to notice that only noble men could be disposible as Kings Musketeers. So, that concludes that our musketeers could have never been Kings Musketeers. That is very interesting. These musketeers wore those outrageous blue and red costumes with big hats and a giant cross on their chest as seen here. The funny thing is, is that according to Wikipedia, the noble men did form an opposition to their own cause because they found they were sometimes seen as to little or too much as servants: ‘the Garde du Corps was an exclusively aristocratic corps. Even the rank and file were drawn from families with appropriate social backgrounds.. […] Officers of the Garde du Corps resented having to wear uniforms (perceived as a form of servant livery) when on duty at Versailles and eventually won the concession of appearing in civilian court dress with their military belts and swords, except when on parade.’

I found a lot of my information here on sparknotes and wikipedia: (http://www.sparknotes.com/lit/3musk/section15.rhtml). I might have made mistakes in all this information, and if so, please inform me in the comments.

To wrap some other musketeer facts up: musketeers were definately not only found in France. They existed from The Netherlands to Sweden and from China to Asia and back to Russia. The title ‘musketeer’, though the gun was far outdated, was last used in the German army until World War I.

The Musketeer hat – is key. Made with wetfelting like my tutorial on Jon Snow’s fur collar, or made through steaming leather. Don’t forget the ostrich feather! A black / purple-ish broquate fabric jacket slightly inspired by 18th century France (to stay Outlanderish, haha) – entirely distressed. Big black boots. Leather trousers and a purple / rose corset. And a female ‘character’ to wear it. Yes, a female musketeer. Probably a pauldron, decorated with leather burning. Big help articles: here and here. A character with distressed clothing, unknown and unidentified. Where is she from? The sword or rapier, I already have ;]. Don’t forget the blue cloaks! I love this entire idea.

This beautiful art piece is not even that far from my idea. By Rzotki @devianart

~Now, I made all my sketches, pattern ideas, found all my fabrics and ideas on the Musketeer hat and the female costume I was going to make and it was going to be awesome. But – and a big but – I don’t have the money to support another big project. I’ve tried asking Dutch fabric webshops, but none are interested since this blog is in English. So.. After storing away all my sketches and ideas I am now looking for an extra job beside the rest of my daily life. The thing is, I use all my extra time for my hobbies, and I cannot think to part from them. So I’m coming up with something very exciting, next month. But – if you know an online fabric store who might be interested in helping me, please, please comment down below. I love how much Baytree Costumes has grown! But, ironically, what would it be without costumes?

2 thoughts on “The Musketeers – An Introduction”